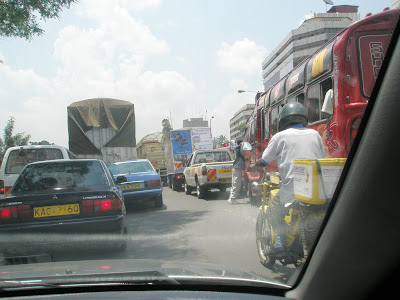 The directive last week by the Ministry of Local Government that PSV vehicles terminate at Muthurwa presents an unprecedented public policy goof. Public outrage was instantaneous and unanimous, and rightly so. This directive must be rescinded.

The implementation the directive wrought sheer mayhem. The traffic gridlock on Jogoo road was horrendous. For the commuting public, it was anguish untold. Colossal man hours were lost. The cost of fuel burnt in the endless traffic queue runs into millions of shillings. How about the amount of carbon dioxide that was added to the atmosphere?

That the Ministry of Local Government and the City authorities would go ahead and execute such a sloppy policy directive is simply callous and inexcusable. On a casual non technical appraisal of the Muthurwa market terminus, only one conclusion leaps out. The terminus and the associated infrastructure are gravely inappropriate for vehicular and human traffic.

One would expect that these questions were considered and factored into the design of the Muthurwa terminus. A near zero throughput at the terminus caused a horrifying traffic snarl up along Jogoo road. The effects of this snarl up reverberated through Kangundo road, Industrial area, Outer ring road, road, and Airport North road.

Commuters were caught in a dangerous rush as they squeezed through a single exit out of the market terminus. Transit commuters had to walk several kilometres across town to access connecting vehicles. Commuters got to work late. But they left early to beat the madness of the return commute. In the evening, commuters confronted the insecurity that lurked in the dark alleys of this crime infested city.

A researcher with the Kenya Institute for Public Policy Research and Analysis (KIPPRA) said the was ill advised. Why would the government rush to implement such a significant decision before undertaking a comprehensive analysis of the implications?

Transportation problems within and its environs are compounded by complex historical design factors. What is needed is a comprehensive rather than piecemeal, ill conceived hit-or-miss policy prescriptions. The current vehicle population far outstrips the existing road capacity.

The road design, especially the round-about works best for low traffic density and is now outdated. The round-about is the major cause of the most agonizing traffic snarl ups. The Michuki rules were great for public safety. However, these rules encouraged a proliferation of low occupancy public service vehicles. A city of ’s size demands high occupancy vehicles.

City zoning rules created “islands” of business, industrial and residential locations. These rules have created a high automobile dependency for daily commute between different zones. The largest volume of morning and evening rush hour traffic is between residential zones and business and industrial zones. Most mid morning and early afternoon traffic is generated by traffic between the business and the industrial zone.

’s transportation system must be overhauled to relieve the commuters of needless agony and ease the endless traffic snarl ups that cost money and increase pollution. In the short-term we need to create rapid transit lanes exclusively for public vehicles and carpool. The expansion of road presents a great opportunity for piloting rapid transit. There is need to institute regulation and tax incentives to encourage investment in high occupancy public service vehicles. Transit heavy commercial vehicles must be restricted to road by-passes.

In the long-term, we must end the over reliance on road transport by investing in light rail infrastructure. The government must invest in a rapid mass transit system and encourage big investors who can deliver efficiency as well as high quality jobs for drivers and conductors.

The city planning authorities must abandon the antiquated zoning approach and embrace mixed-used development. This will greatly reduce commuting and vehicle-dependence among residents. Punitive parking and transit tax should be levied on vehicles once a rapid mass transit system is in place and the by-passes are operational.