Kenya: Light at the end of the Tunnel? 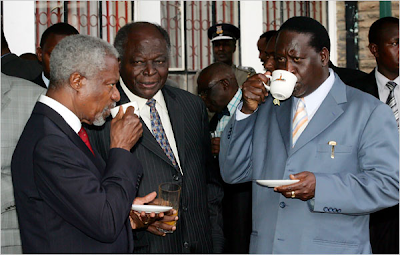 After nearly six weeks of ghastly murder, rape and plunder, ’s negotiatiators appear to be edging close to a political compromise. Chief mediator, former UN Secretary General Kofi Annan said “I now can see light at the end of the tunnel”. This must become true if the anarchy and bloodletting that gripped one of Africa’s most stable nations is to end.

Mwai Kibaki and his team must conclude and implement an agreement that would genuinely share power with the main opposition, Orange Democratic Movement (ODM). Anything less than unfeigned commitment will provoke fresh fury and turmoil.

It is troubling how easily Kenya began to tear itself apart after December’s botched presidential poll-and after the electoral commission chairman admitted that he did not know whether Mr. Kibaki won.

The violence since has been horrendous: murders, rapes, amputation, mutilations and ethnic cleansing. Over 1,000 people have died, and nearly 350,000 displaced and dispossessed. While there has been an uneasy calm in recent days, the economy is beleaguered and experts warn that all sides are armed, mobilizing and ready for a duel.

Arch Bishop Tutu, the UN, and the African Union the EU, the have spent weeks nudging Mr. Kibaki and Mr. Odinga toward a political settlement. weighed in differently. claimed Western style democracy was not appropriate for . Clearly, has chosen not to stand with millions of Kenyans who travelled hundreds of kilometres in believing that only votes cast would be tallied.

On February 21st, ’s government announced that it would create a new position of prime minister, hopefully for Mr. Odinga, one of the chief demands of the ODM. The expectation was that a final deal would be reached by February 22nd. The government side failed to show up at the talks in the morning. The talks resumed in the afternoon and by the close of business there was no deal.

Any deal would quickly come undone if Mr. Kibaki also doesn’t cede sincerely, some real authority and responsibility. The ODM deserves a central role in governance-and ’s survival and eventual return to the path of peace and order demands it.

A Kibaki and Odinga led administration is certainly not a universal panacea. It certainly will not deliver justice. The government must prosecute the perpetrators of the heinous crimes of the post-election. Their must be a comprehensive plan to expedite the resettlement of those displaced and dispossessed.

I worry that there will be no sustained peace, unless Kenya addresses the fundamental questions of discontent, deprivation, entitlement and yawning inequalities that turned friends, families, colleagues and neighbours from different ethnic groups against each other.

Collectively, the two sides must quickly address constitutional and institutional reform issues that are the root causes of the anarchy. An independent commission, comprising Kenyans of high moral probity, must be constituted to establish what happened in the vote tallying process and to suggest comprehensive reforms to the electoral system.

The victor-vanquished system of democracy under which the president wields imperial, unbridled power and exclusively rewards their ethnic group and politically correct cronies is untenable. This winner-take all systems has turned governance and public service into a theatre for ethnic intrigue and partisan absurdity.

A fundamental constitutional reform is long overdue. The current constitution is an impotent, listless document that has woefully failed to deliver even on its modest promises. The current regime and regimes before executed social and economic policies that allowed untenable ethnic inequity to fester and failed to build social cohesion and ease the path to nationhood.

The current constitutional dispensation allows the president to emasculate vital institutions and constrains the civil service to prostrate in servitude to the presidency. Parliament is an innocuous and sterile ambler that disdains its legislative obligation. The reforms must create a civil service that eschews the tyranny of nepotism or tribalism and upholds the aristocracy of merit and equity.

Poverty must be tackled. Poor children, wasted by hunger and malnutrition, crippled by disease, trapped in failing schools, have limited chances of receiving a solid education, gaining a decent wage employment, and providing a better future for their own children are severely compromised. These children, later as young adults, are easy to enlist as gangs and militias.

will rely on international largesse to get back on track. The new leadership must design and execute a responsible foreign policy and an international outreach strategy. Chest thumping and proclamations of sovereignty does not constitute and enlightened foreign policy. must redeem its international image and inspire investor confidence.