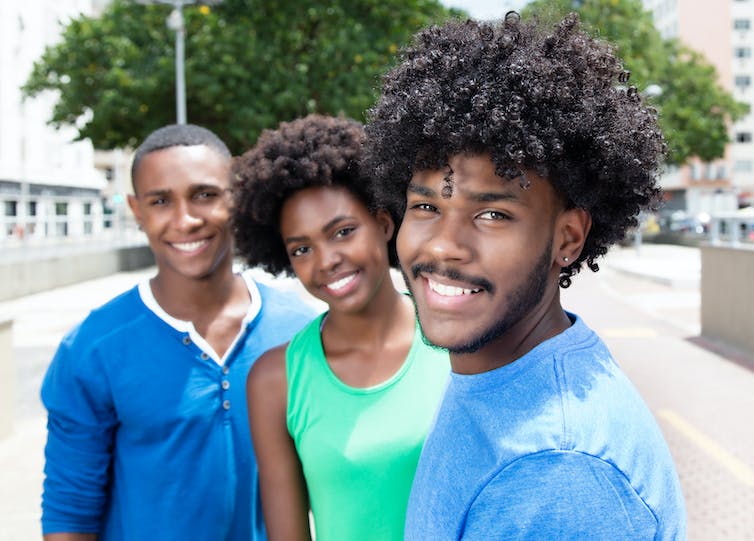 Young people are the mirror image of the adult world around them.
Shutterstock

With an estimated median age of about 17 years, East Africa is one of the youngest regions in the world. By comparison, the median is about 40 in Europe, 38 in North America and 29 in Asia. According recent national census data for Kenya, Tanzania, Rwanda and Uganda, about 80% of the population is below 35 years.

The identities, norms and values of this majority generation provide important clues for understanding the future; the world’s collective moral and ethical character.

A study commissioned by the East Africa Institute of the Aga Khan University, 7,000 18 to 35-year-olds in Kenya, Uganda, Tanzania and Rwanda were interviewed between 2014 and 2015. The object was to understand how they thought about themselves and what values and attitudes they held.

Identifying as young people is consistent with policy and legal categorisations that establish them as a socially distinct category. This distinct identity enhances a sense of esprit de corps and a sense of belonging. This in turn confers a sense of social entitlement as well as shared grievance.

The findings suggest that young people’s identities, values, norms and attitudes are shaped by their families, their communities and by wider society. Our findings are consistent with previous work by sociologists and behavioural and moral economists.

Young people are the mirror image of the adult world around them. This means that any if countries want to change the attitudes and values of young people they need to start the adults – from the family to community to the national level.

While the study revealed numerous parallels, there were also striking differences. In Kenya for example, the proportion of young people who identified by ethnicity was 4% between ages 18 and 20. But the number nearly doubled to 7.8% between the ages of 21 and 35. The converse was true in Tanzania where ethnicity as a dimension of identity had remained relatively stable (2.3% and 2.9%) from between the ages of 21 and 35 years.

This can be partly explained by the fact that since independence Tanzania, unlike Kenya, has focused on reducing the issue of ethnic identity. Tanzania’s ruling party elite has consistently supported the ethos of Ujamaa - equitable economic production and distribution of public resources to drive social cohesion and economic progress.

About 80% of the young people involved in the survey valued faith first. About half valued work and family first while 37% valued wealth first and a quarter freedom first.

But about 60% admired those who used get-rich-quick schemes. And more than half believed it didn’t matter how one makes money while 53% said they would do anything to get money. The survey found 37% would take or give a bribe and 35% believed there is nothing wrong with corruption.

An outliner was Rwanda where most said they wouldn’t take or give a bribe and were unambiguous about the fact that corruption was wrong.

From the survey results it’s clear that corruption has been normalised in Kenya, Tanzania and Uganda. Bribery is viewed simply as “eating” and isn’t seen as an ethical aberration.

The view of young Rwandans is clearly affected by what they experience on a day to day basis. For example, there were reports of policemen accused of corruption being fired in 2017 while reports of civilians accused of bribing policemen arrested are not uncommon. In addition, the Ombudsman regularly publishes the list of individuals convicted of corruption related offences.

It is possible therefore that young Rwandans engage in a cost benefit analysis. This could inform the ultimate decision about taking or giving a bribe or a belief that there was nothing wrong with corruption.

Rwanda’s example offers hope. It demonstrates the importance strong leadership and an unequivocal commitment to integrity and public accountability in shaping the attitudes and perceptions of youth.

This article was originally published on The Conversation. Read the original article.