Too many deaths too few explanations 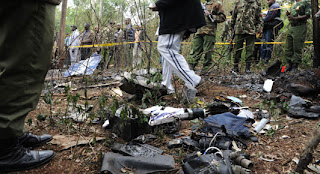 Does anyone trust the Kenya Police to conclusively determine the cause of the chopper crash that killed Internal Security Minister, his deputy?

It is instructive that the Kenya police initially ruled that the cause of a recent explosion in a downtown Nairobi building was an electrical fault. The police later changed their position saying the cause was a home-made fertilizer-based bomb.

I have seen pictures of the scene of the chopper crash and the careless plodding by politicians and security apparatus. My fear is that there was every opportunity to destroy or conceal material evidence. Kenya's security apparatus have a terrible track record. So many deaths under suspicious circumstances remain unresolved.

Here are short list of cases that are yet to be solved: The deaths of Tom Mboya, JM Kariuki,  Pinto, Kitili Mwendwa, Gama, Robert Ouko, The chopper crash that killed: Bruce Makenzie,  Ismael Chellanga, Kipkalyia Kones,

We may never know the real cause of this tragedy.