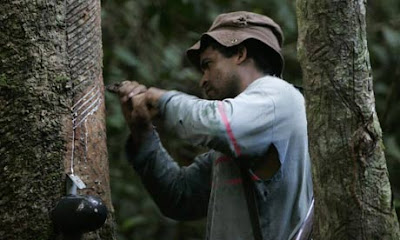 Making love might not seem like the most obvious way to save the world's largest tropical rainforest - and combat the threat of Aids.

But according to the Brazilian government, which this week opened a £10m condom factory deep in the Amazon jungle, it could be an effective weapon in the battle to silence the chainsaws of Amazonia.

On Monday government ministers gathered in the remote town of Xapuri to open a condom factory that will use latex manually extracted from the area's forests to make around 100 million condoms a year.

The factory, in the Amazon state of Acre, would allow local rubber tappers to profit from the rainforest without destroying it, officials said. Marina Silva, Brazil's environment minister, said the Natex condom would help create "a new pattern of production and a new process of inclusion that would value the forest being left standing".

As well as protecting the rainforest government officials hope the factory will help to reduce Brazil's dependence on condoms imported from Asia. Last year Brazil distributed around 120 million free condoms as part of a massive anti-Aids drive that has helped to slash infection rates in South America's largest country.

In a statement the health ministry said more than 500 local families would also benefit from what has been dubbed the "made in Amazonia" condom, together earning R$2.2m (£657,000) each year.

Hugo Paz de Souza, 43, a rubber tapper, said the factory would allow him to double his income to around £200 a month.

"Because of this I've managed to buy a few cows and give my family a better life," he told local newspaper Pagina 20. Raimundo Barros, vice president of the local agricultural association, said: "This product will allow people to make love with security and to better plan their futures."